The blog is called “Motofiction” as it was initially created for “what if” stories about the motoring brands that ceased to exist i.e. articles like “what if Polish pre-war brand CWS survived till today”. However, this analysis is based on facts and my conclusions seem to have been confirmed (see the end of the post).

The black Bugatti 57SC Aéro Coupé also known as the Black Atlantic or La Voiture Noire (the black car) is such a legendary vehicle that there is no better way to remind the world that cars are works of art than to find this Bugatti. Therefore, every hypothesis on its whereabouts should be verified. After a deep analysis of all available sources, I came to a conclusion that the car has been sold before the World War II. Here are the arguments:

•The plate with the initial chassis number of La Voiture Noire (57453) has been found in another car (the Hidden Treasure- http://www.bugattipage.com/newspics3/57453.pdf) in the USA. 57453 is the first of three chassis numbers known to be assigned to the Black Aéro. The last of them is 57454. After it had been used for La Voiture Noire, it was assigned to prototypes- Type 64 (probably) and Type 101 (for sure). So, there is little possibility that the Black Aéro was lost by the Bugatti company. If it had happened, the plates would have been lost as well.

•The 57454 chassis number was issued for Ettore Bugatti on 2th of July 1938. On 31th of September it was reassigned from the „Coach Gris” used by Mr. De Boigne (most probably François Le Borgne de Boigne, who later became the husband of Ettore Bugatti’s daughter Lidia) to Coach Special Type 64 with engine no. 2. „Coach Gris” means „gray coupé” or „pale coupé”. Therefore, the „Coach Gris” couldn’t be the Black Aéro. If Black Aéro had remained a factory car, probably any third vehicle between it and Type 64 wouldn’t have received the plate.

•A photography taken in 1939 shows a factory mechanic, Alphonse Meyer, working on the Black Aéro that has the 1521 NV4 registration plate (known to be linked to the 57454 chassis number). Selling the car would be a good reason to move the plate temporarily to Mr. De Boigne’s car and then, for a longer period of time, to the Type 64.

•The hypothesis that the elements of the Black Aéro have been used in Type 64 prototypes hasn’t been confirmed despite the fact that almost all of the Type 64 chassis are accessible. The only Type 64 chassis that is not well known to the public is owned by Mr. Robert Jarraud. However, the Bugatti enthusiasts say that the best way to find a contact to Mr. Robert Jarraud is to write to the famous author of “Bugatti Type 57 Sport”, Mr. Pierre-Yves Laugier.
Moreover, the transformation would have taken very little time as the Black Aéro still existed in the 1939.

•A French insurance company named “Aon Classic Cars” states that no parts of the Black Aéro have been found yet, so there is a high possibility that the car may be complete (http://www.aonclassiccar.fr/2016/04/bugatti-atlantic-57453-fausse-nouvelle-bonne-nouvelle/ ).

•In the Bugatti factory documents there are some mentions about a „Belg. Coupé” which had a chassis number of 57454. „Belg. Coupé” was meant to be ready for the 31th of August 1939. In the „Bugatti Type 57S” book by Mr. Bernhard Simon and Mr. Julius Kruta it’s assumed that the „Belg. Coupé” was a Type 64, planned to be exhibited on the Paris Motor Show in 1939. However …

•In the interwar period Paris Motor Show was often organized in October,

•The car was planned to be ready for 31th of August, the day before the outbreak of the World War II. The Paris Motor Show exhibition was canceled due to the war,

•Bugatti had an agency in Paris, where they sold cars. One of the factory racers, Robert Benoist, who reportedly drove the Black Aéro Coupé during Le Mans qualifications, was the sales director of that agency.

•On the other hand, Bernhard Simon and Julius Kruta mention „Gabriele Duhoux” as the client who ordered the „Belg. Coupé”

•Among the cars stored in Bordeaux, that are listed in the factory document from 18th February 1941, there is a “57454 Coupé Atlantic” having the “2CS” engine. However …

•The car’s registration number is 1244 W5. The Black Aéro has never been photographed with such plate. The Type 64 has.

•The cars that are noted in the factory documents under the name “Atlantic” (i.e. the 57473 and the 57591) have different front wheel arches than Aéro Coupés (57374 and 57453), with headlights on a top of a fender. There is no trace of an evolution of the Black Aéro into a “proper” Atlantic. On the contrary- the last known photograph (the one with Alphonse Meyer) shows the car with low placed headlights.

•If the Black Aéro Coupé is found near Brussels, it will be a double sensation. The black example of the Type 64 that is held in the Cité de l’Automobile Museum in Mulhouse will become recognized as a “Type 64 Atlantic”. It can make sense. The rear part of the Type 64 body resembles Atlantics as well as Aéro Coupés and its headlights are placed near the top of the wheel arch, like in Atlantics.

•Bordeaux has been an obvious direction for every person who searched for “La Voiture Noire”. It’s really hard to believe that the “57453” could still be anywhere near this city. It can also be assumed that all the places around the old Invicta works in Laeken (discussed by Ettore Bugatti and king Leopold III as a possible location for a Bugatti factory) have been combed as well.

•Gabriel Duhoux was a Bugatti customer from Brussels, as well as the founder and the owner of the Le Berger Hotel. He participated in the Monte Carlo rally (so he was more likely to buy a car that had been spiritedly driven by Robert Benoist). In 1937 he bought the Bugatti 57S Atalante with chassis number 57562. In early 1950s he sold that car to Jean De Dobbeleer. The 57562 had just 7000 km of mileage. It had been hidden during the WWII, then it was displayed the Grand Prix d’Excellence in Brussels in 1946.
In the 1950s, an attept to run the engine caused that the gears between crankshaft and camshaft were broken.

•According to the book „Le Berger. Souvenirs d’une maison de rendez-vous” written by Isabelle Léonard, Mr. Duhoux owned eleven mansions and multiple terrains. Pretty much space to place a car. And, certainly, a wealth big enough to think about buying a Bugatti 57SC Atlantic (or rather Aéro Coupé).

•Mr. Duhoux died at 61. All his possessions were inherited by his life companion, Mrs. Thérèse Goyvaerts (http://intohistory.com/hotel-le-berger/). They had no children. In the 2010s the Le Berger Hotel, which had been created in the 1935 by Mr. Duhoux, was planned to be demolished.

After I had asked the notary of Mrs. Thérèse Goyvaerts to contact her heirs, I received an email with an information that the car had been sold in late 1950s and that the name of the vendor is not known. At first I thought that the heirs of Mrs. Thérèse Goyvaerts might have confused the Black Aéro Coupé with the 57562 Atalante. However, the Atalante was sold to Jean De Dobbeleer in early 1950s. Of course, I’m going to ask for photos and documents and continue the search for the current owner.

Here is the screenshot: 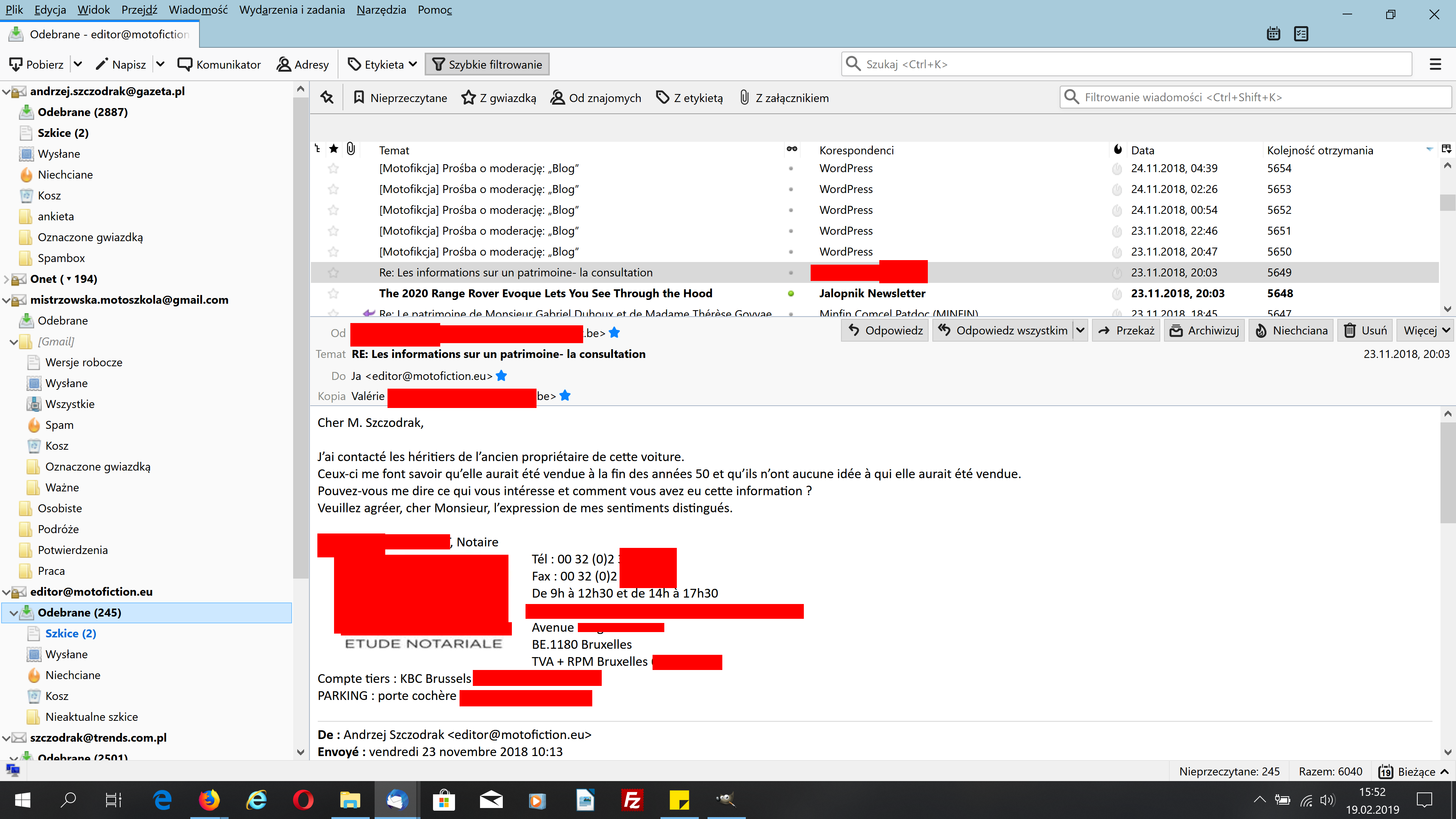 I continue the research.
Stay tuned.